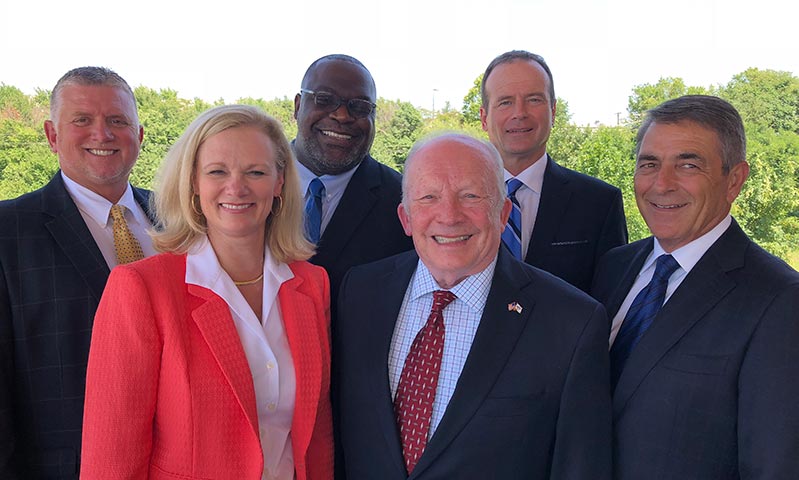 Trevor Lavy, Chairman of the Board

Frank Broyles became head coach of the Arkansas Razorbacks football team in 1957. From 1973 to 2007 he served as Athletic Director of the University of Arkansas, where he earned legendary status in college athletics, broadcast journalism, and charitable development. Coach Broyles was a founding director of Priority Bank. For more information, visit Frank Broyles' Wikipedia page.

Dr. H.D. McCarty served for 39 years as Senior Pastor of University Baptist Church in Fayetteville and 33 years as Chaplain of the Arkansas Razorbacks. A Brigadier General (retired) in the Unites States Air Force, Dr. McCarty has served on the Board of Governors of Washington Regional Medical Center and the Board of Directors of the Fayetteville Chamber of Commerce. He currently serves as President of Ventures for Christ. Dr. McCarty joined the Board of Priority Bank in 2005.

Ray Stidham has been President of Priority Bank since 2013. Ray joined the Priority Bank Team with 23 years of banking experience in the state of Arkansas. He is a 2007 graduate of the Graduate School of Banking in Colorado. He currently is the President of the NWABOA and member of the Prairie Grove Chamber of Commerce. Ray has always been very active in the communities where he worked and lived and has served those communities in such roles as President of AAIDC, Washington Water Authority Board Member, Chamber of Commerce Member, and School Board Member. Ray and his wife currently reside in Farmington.

Mark Marquess is the owner of Riverwood Homes in Fayetteville, Arkansas. Mark has been an active member of the Northwest Arkansas real estate and development community for over 35 years. He has built over 2000 homes and developed almost 3000 residential lots in NW Arkansas. He has been President of the Northwest Arkansas Home Builders Association as well as Vice President of the Arkansas Home Builders Association. Mark also served two terms on the Fayetteville Chamber of Commerce Board of Directors. He is a resident of Fayetteville and graduated from Northeastern Oklahoma A&M College with a degree in Marketing.

Marvin Caston is the Associate Director of the Razorback Foundation. He began his professional life with the Razorbacks as an Assistant Athletic Director for Compliance in 2005, and has worked with the Foundation since 2009. Caston played for the 1998 Razorbacks football team that shared the SEC Western Division title and ended the year ranked No. 16 in the nation. He was a member of the 1999 SEC Academic Honor Roll and earned a Bachelor of Arts and a Master of Arts in Education from the UofA in Fayetteville. A former Razorback fullback, Marvin also served as Chairman of the "A" Club membership drive, Co-Director of the Athletic Prevention Programming & Leadership Education Program and Assistant Athletic Director in the student life office. A native of Winnsboro, Louisiana, Marvin and his family reside in Fayetteville.

Bo Renner is a sixth-generation Arkansan and native of Fayetteville, Arkansas.     He attended the University of Arkansas where he was elected Student Body President before graduating with a degree from the Sam M. Walton College of Business.  Thereafter, Bo went to the University of Arkansas School of Law and clerked in the Office of Governor and the Supreme Court of Arkansas.  Bo has since joined the law firm RMP LLP, where he practices a wide variety of civil litigation and business-related matters.  In June 2018, he was admitted and completed the National Trial College at Yale University and, in 2019, was named a part of the Northwest Arkansas Business Journal’s Fast 15.  Bo is active in his church and is a member of the Washington Regional Foundation Board of Directors.    Bo and his wife Ally reside in Fayetteville, Arkansas.

Our mobile services turn your smartphone or tablet into a personal branch.